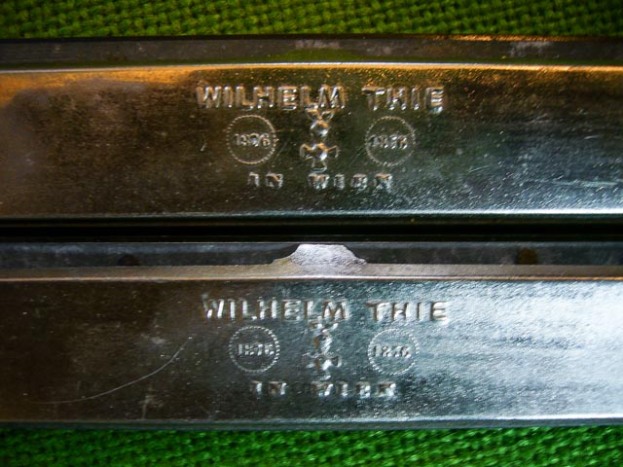 These twin harps look like none of the Thie harps in Whiteman.  The closest are the diatonic 1896 page 455), but that is a single row, only ten holes. Sorry about the blurry photos, I drank too much tea today. The years are all 1876. The harmonica sounds very nice for such light weight and old (?) harp. A few holes do not work very well at all tho.

I found this fascinating post on Wilhelm Thie from Haffner:

I have a question about naming harmonicas. I want to put the right reed count and the right hole count on my id’s. Would this one, for instance, be called a 32 hole, 32 reed? Or 16 reeds. I think the reeds are every other hole but there are 8 in each row.

What makes a tremolo, a tremolo?  does it have to have holes on both sides?

As always thank you for your vast harp knowledge. You will have top billing on the site. lol.

It is absolutely disgusting outside. I won;t even deposit my checks. Can’t breathe.

Falling behind a little with my email and way, way too hot.

First off, as an Englishman, I need to point out that there is no such
thing as too much tea!

Not seen this particular harmonica before, either in real life or in
old catalogs. It’s obviously post-1876 and probably pre-1900. Thie
were one of the big companies in their day, but things all started to
fall apart around 1900. The factory got sold to Koestler around WWI
and I think he continued to make some under the Thie name, but by this
point, Hohner were really dominating the market.
Does this page clear up the questions you had about the
different harmonica types:

If not, ask away.

I have been waiting for a harp that was possibly made before the turn of the century. (Love that phrase)

Sorry for my harp ignorance. Though in my defense they are a very confusing musical instrument except for playing. Which is what I like. :-}

As far as the Viennese Richter note system goes, you should read the discussions on Harp-L. I’ll try to find the one on the Richter scale. OMG. Those guys are amazingly musicians. Pretty much everyone there plays chromatic I think, but often discussions pop up about everything. I can’t read them all and the site is ancient which is the only problem. They should switch to a forum.

That was the most AWFUL game I ever saw.  ugh. you must be an Englishman. lol. It was too upsetting for me to finish out the match. I blew the living room after Germany made their third goal.

I am beginning to believe that Harmonicas are the most under researched, complicated, unusual musical instrument out there.  Just the story of How Hohner Ate All Harp Manufacturers would be fascinating. Maybe we should write a screenplay about Hohner.  Is the harmonica the only wind instrument you can blow and draw from so you can almost breathe while playing?

7-1 isn’t something that should ever happen in a professional soccer
match. That said, as an Englishman, I should really have been
disappointed that it wasn’t Germany losing 7-1.

I agree that harmonicas are amazingly under researched. Part of the
problem is that for the last century and a half, they have been rather
commonplace. Nobody bothers looking at the commonplace, especially the
inexpensive commonplace. I first starting gathering all this
information together when I realised that I couldn’t just go to the
library and find answers to my questions about the instrument. The
last couple of decades, the situation has definitely improved, but
there’s still a ton of misinformation out there.

This Duss an amazing harp and my very first purchase of this type. It sounds wonderful!!! The only negative part was the seller. He ignored my shipping instructions, injured the box and was not very cooperative. oh well. The harp itself was just rattled a bit. And it was very inexpensive.

The photos were taken in a hurry so let me know if you need more. I acquired another Duss the same day. I love that name: Duss. I imagine Hohner ate him too. 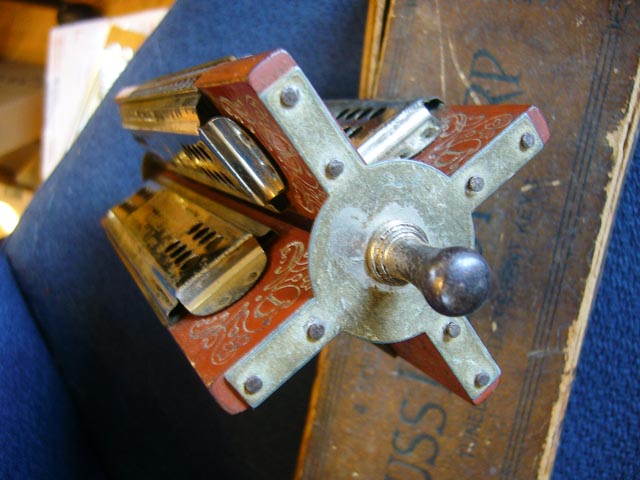 John Samuel Duss, the man with the very important signature, was a
well known trumpeter, composer and band leader (the Duss Band, would
you believe?): 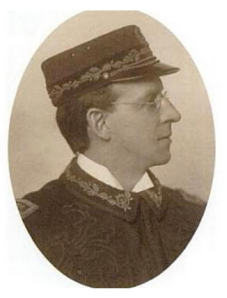 His harmonicas first appeared around the turn of the century and seem
to have died out around the time of the brass shortage during WWI. No
idea who actually made them, but John Whiteman has mentioned a link
with F.A. Bohm. 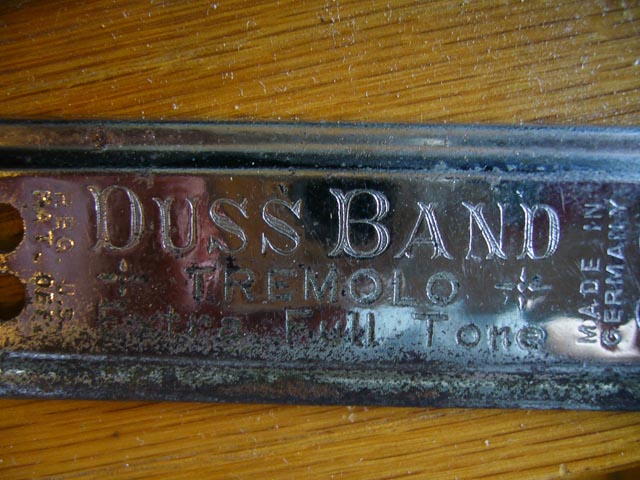 “Rythm without the first h”

The harmonica box is quite theatrical. Somehow someone misspelled rhythm of all words, on the harp AND the box. But Mr. Minevitch made a very comfortable harp and told me where to rest my thumb. It does have extra fine tonal results. 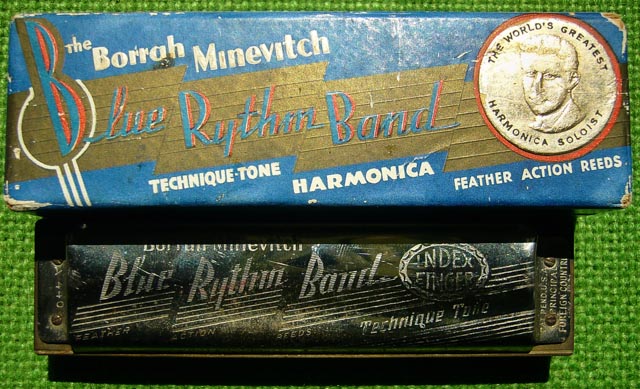 This one almost drove me crazy. I knew I had one somewhere, but I
didn’t recall if it was spelled correctly or not. We moved last year
and are possibly moving again, so most of my stuff is still in boxes.
I finally found it, but I had to wade through a ton of old harps to
get to it. I’m pleased I did, though, as it’s a really nice playing
instrument.

Anyway, mine is lacking the box, but is correctly spelled. There were a whole range of harmonicas made with this name in the 1930s – single reed diatonics, tremolos and an assortment of octaves, some with the misspelling, some correctly spelled. I don’t know which is more common. You may know that the Hohner Beatles harmonica with the mixed up names is more common that the correct one.

These were made in the mid-1930s, most likely by Hugo Rauner, even though Minevitch had been a prominent Hohner endorsee. Rauner
(not to be confused with F.A. Rauner, another Klingenthal based
harmonica maker) was a relatively short lived company originally based
in Klingenthal, but relocating to West Germany some time around WWII.
They are presumed of be the maker of these Minevitch instruments, as
they also used the “index finger here” markers on the covers of some
of their instruments.

As well as the correct spelling of “rhythm”, the covers on mine are
quite different. The bottom cover makes no promise of superior musical
results, or tonal effects, just a claim that these instruments are
used exclusively by him and the Rascals. The rest of the wording is
the same, but in a different style.

omg, there are TWO Rauners?  I WAS confused, no wonder. I have harps from both.Those index finger markers are unusual. never seen them before.Who is Boris Minevitch if the harp was made by Rauner, and what does Boris have to do with the Rascals who I am assuming are the crew of players on the box?

Two Rauners, both from Klingenthal, but I don’t know what theirrelationship was. F.A. Rauner one claimed to have the second largestharmonica factory in the world and started out in the mid-1800s. Hugo Rauner did not pop up until just before WWII, then seems to have vanished soon after the war. I don’t really know much else about him.

Minevitch was a big stage and radio star in the 30s and his Harmonica Rascals was a comedy/musical group he put together. I have a little about him on this page:

If you search on his name in YouTube you’ll find a bunch of clips of him and the Rascals.

This is a lovely harp. Very heavy, sounds great, beautiful etchings. Weiss’ signature almost looks like he etched it right on the harp, though I know he didn’t.
Would this be considered a single sided tremolo, 40 reed (I counted)?
Hope it is cool there. The day has heated up a bit much for me but the temps are diving tonight.   My husband is back in four hours from his tour de scruffy, as we call it. He rode the Rails to Trails ride with his best friend, who lives in Columbus, Ohio. and is driving back there as ‘we speak’.
Better sign off before i start talking Futbol.

Really hot and unpleasantly humid weekend, with some serious
thunderstorms. Now we are headed for a weirdly cool few days, which is
fine by me.

Weiss made some really nice instruments and they were one of the
really big players in the business in their heyday.. Old man Hohner
was invited to their factory and he apparently stole a bunch of ideas
from them. They eventually got bought out by Hohner in the late 20s.

This would indeed be a 40 reed single sided tremolo, most commonly
described as having 20 double holes. The “B” indicates the key,
however in German usage, what they call B is what everyone else would
call Bb. B natural is indicated by the letter H. Judging from the
name, it was made for the German market, rather than for export. The
only Weiss catalogs I’ve seen were for the US market, so there’s not
much I can tell you about this one.

Were the harps manufactured for the German market made any differently than the one’s exported, aside from the boxes and words in German Maybe Harland has a Weiss catalogue. He said he has a many many catalogs scattered about.
I read about Old Man Hohner and his sneaky ways.  CH Weiss’s work table was the first place Hohner stole from, I think. It would make a great movie.
The weather outside is supposedly cool here but I am sweating profusely. Think the humidity is rising. again. sigh…

It’s a beautiful Autumnal day outside right now, which would be great
for mid-October, but is a bit weird for mid-August. We even have a
night in the 40s forecast for this week.

That harmonica could well date from 1910-ish, but I must confess to
something of a lack of information about pre-Hohner Weiss harps.
Generally speaking, harmonicas for export were built the same as
harmonicas for the home market, the only real differences being
cosmetic.

there are many ebay harmonica sellers awake at 4am. 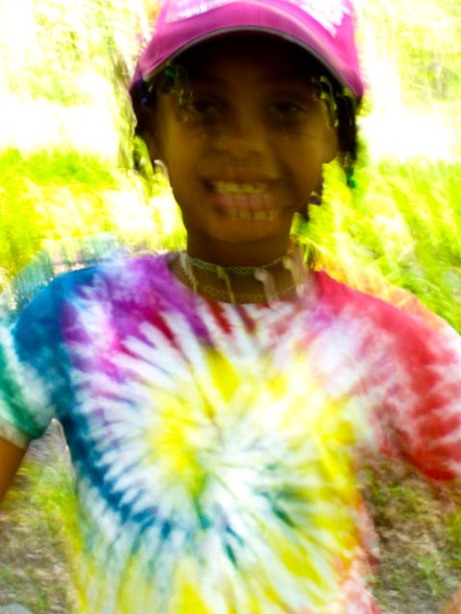 You were not very nice at all.

In fact, you were awful.

You RIPPED the box.

Why are the MOST expensive harmonicas shipped the worst.

I give explicit instructions and some sellers STILL ship terribly.

The best shippers tend to ship the tiniest harps. Why is that??

http://www.patmissin.com/ffaq/q38.html THE authority on harps.

Maybe I need to explain each link, whatever.

This is an oil painting called Headache. Not a harmonica however.

those are coming very soon.

I am now about to publish my very first ever WordPress Post.

(and edit over and over ad over…)

Ads below this line